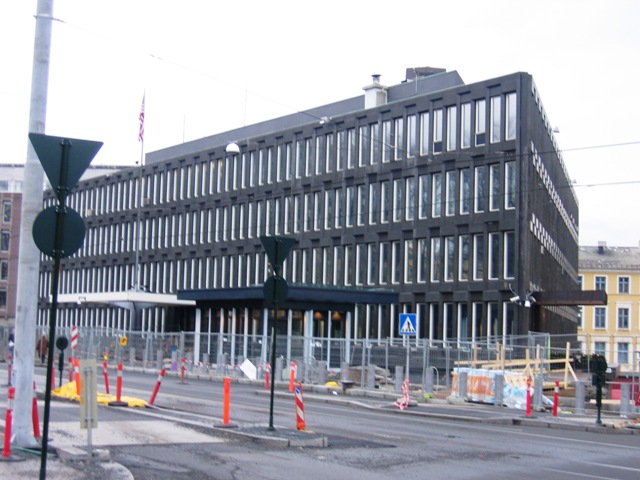 I was invited by some people who know some people to an invitation-only happy hour at the U.S. Embassy last Friday. It was an interesting experience, to say the least. It’s not that going to the embassy was exciting in and of itself – as an American, I’ve been in there before, the last time to be charged $80 (475kr) for new passport pages (only the U.S. government could somehow make 12 small pieces of paper cost so much).

The U.S. Embassy building, designed to look like a potential hideout for a James Bond villain

After waiting in line outside the embassy for 40 minutes to go through an airport-style security screening (I was allowed to keep my shoes on, at least), we went around to the back of the building and into the embassy’s super-awesome basement. You remember that time when you had the idea to turn your basement into a bar where all your buddies could hang out? Turns out the embassy folks had the same idea. There was the usual shtick of Hollywood posters, road signs, and pictures of Jimmy Stewart and Cary Grant to let you know you’re in “America” – basically a buttoned-down version of T.G.I. Friday’s – but other than that it was about as exciting as the lobby of a Holiday Inn Express.

So why wait in a long line on a cold night for a so-so basement bar? Well, for one, there was cheap beer. At least, cheaper than anything you would usually pay at a bar in Oslo. Curious as to how this was possible, I inquired what was going on – was Uncle Sam subsidizing the drinks? I asked one of the embassy staff at the bar, I was assured that the 40kr bottle of suds was not my tax dollars at work – the bar is fully self-financed. Beer and liquor is shipped in from Ramstein Air Base in Germany, and the Norwegian Ministry of Foreign Affairs graciously lets the Americans bring it in for on-premise consumption without paying any of those high Norwegian taxes. The embassy then sells it at these happy hour for a slight profit, and use the proceeds for other embassy-related activities Good deal! 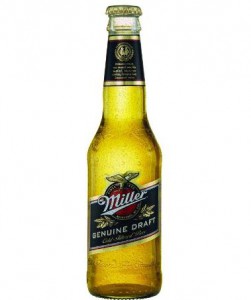 Couldn’t get too excited, though – sure, it was cheap, but it was cheap MGD
Snarky comments aside, it was a fun night – the staff was friendly, the burgers were hot, the beer was cold, and there was record attendance, with good conversation all around. It was interesting to talk with other Americans about the election, as well, and hear what people from different parts of the country thought about the current events. Regardless of political orientation, there was one clear consensus – we’re all glad to be living overseas when it means not having to watch endless “I approve this message” political ads for another 8 months.
Speaking of the election, the Norwegian embassy in Washington, D.C. has been writing a series of blog posts explaining the current election process. I often find it difficult to explain some aspects of U.S. elections, like the electoral college, to folks in Norway who are familiar with a completely different form of government and voting. The blog is straight-forward and serves as a good introduction and overview of the people and processes in the current election. It’s sadly devoid of any serious commentary on the candidates, their proposed policies, or the process itself. I fully understand why the embassy is not commenting on an internal U.S.-affair, but it’d still be interesting to hear the point-of-view of Norwegians who are actually in the U.S. and understand the system well. So, if you want to know more about some of the stranger elements of US elections like SuperPACs and Ron Paul, check out the blog here.