Over the holidays I had a chance to go to Stockholm for a few days. Last-minute trips are the only way I travel, but sadly the Oslo-Stockholm train was always booked weeks in advanced whenever I checked or way too pricey to even consider. Turns out, though, that few people take the train during romjul (the week between Christmas and New Years – yes, the Norwegians actually have a specific word for the week between Christmas and New Years), so I bought some tickets 8 hours before the train left, and off we went.

Stockholm is a nice town – not my favorite capital city in Europe, but definitely an enjoyable place to spend a few days. I had been anxious to see what this town was about since on more than one occasion a Norwegian had apologized for me for Oslo not being Stockholm. The conversations usually went something along the lines of:

Norwegian – “How do you like Oslo?”
Me – “Oh, I like it. It’s a nice city, and really beautiful with the water and nature so close”
Norwegian – “Yes, it is nice. It’s not Stockholm, though, sorry, but it isn’t bad”

So what does Stockholm have that Oslo doesn’t? First and foremost is the size – Stockholm is a BIG city – basically if you took every neighborhood in Oslo, made each of them into the size of all Inner Oslo, then mashed them all together, you get Stockholm. I felt like the country boy arriving in the big city from his local village after coming to Stockholm from Oslo.

The scale of building was much more impressive, too. This of course has to do with the very different history of the two places – Oslo was a sleepy provincial capital for much of it’s history, and even when they were building impressive structures, the Storting was consistently penny-pinching. The Royal Palace here in Oslo, for example, was originally going to be bigger with more ornamentation, but the Storting forced the architect, Hans Linstow, to scale down the designs. They even stopped funding the project for 10 years because of budget concerns, and the palace foundations just lay there for a decade. (considering some recent concerns over the cost to repair the National Theater, perhaps little has changed). None of this money-grubbing was going on in Stockholm – this was the capital of a imperial power in the 1600s and 1700s, and the government wanted everyone in town to know it. Many of the main buildings here – the palace, the riskdag (parliament), the national gallery – are massive in scale and dwarf their Oslo counterparts.

And they had butter. Real butter. On store shelves. I wanted to take a photo, but that would have been a dead giveaway I was coming from Norway.

I’m not pointing all this out to say one is better or worse. If anything, these differences simply highlight the two country’s contrasting histories and national characteristics (though, to Sweden’s credit, I do miss butter). My hometown in the U.S. of Portland, Oregon is actually in a similar situation with our larger neighbor – Seattle, up in Washington state. Seattle is the big city of the American northwest, while Portland, while is a decent-sized city in its own right, doesn’t reach the same hustling, bustling, “metropolis” level of Seattle. But that’s actually the reason why I like Portland a bit more than Seattle – that comfy, cozy feeling. Both Stockholm and Seattle are big, fun, and busy, but Portland and Oslo have that small-town feel which makes them both so easy to live in and enjoy.

Portland + Oslo = Small-town feel even in a (relatively) big city

So in that regard, going to Stockholm actually made me appreciate Oslo a bit more.

That was the positive. Now for the….well, not-so-positive. I found one major area where I will join the ranks of those saying “sorry, Oslo’s not Stockholm”. That area is historical preservation – Stockholm has done an excellent job of preserving the historical look and feel of it’s main areas. Oslo, on the other hand, is a mish-mash of architectural styles, and few areas have been preserved with any true historical feeling.

For example, take our old town area – old Christiania (or Kvadraturen). Considering the size of the area, not a lot of the original buildings have been preserved (or restored in the original style), and those that do remain are not well kept-up. Instead of keeping the old-town look feel, both of the original 1600s town and the 1800s developments, the Kvadraturen is instead the place with empty streets, quiet offices, buildings with run-down paint jobs, and a place you don’t want to be at night unless you’re looking to pick up a “friend” for the evening. This is a shame, as the old town would be an ideal place for tourists and locals to gather. Just look at Christiania Torv, where the older look and feel is (somewhat) maintained – that is very popular in the summer. Go just a few blocks east, though, to the modern offices wedged between unkempt older buildings around areas like Bankplassen, and the Kvadraturen is often devoid of life. 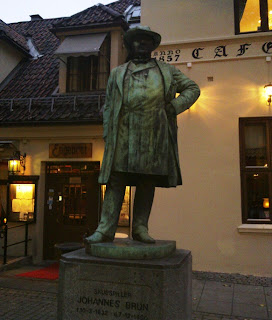 He’s often the only one around Bankplassen in the evenings

Now look at Gamlastan – Stockholm’s old town. The cobblestone-style streets have been preserved, the buildings are maintained in the traditional style, and there’s an attractive historical consistency to the area. 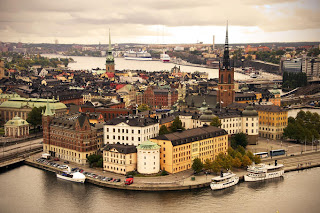 Note the lack of modern buildings in Gamlastan, part of what gives the area its appeal
In Oslo, on the other hand, we have our oldest standing building in old town surrounded by flat-looking office buildings. 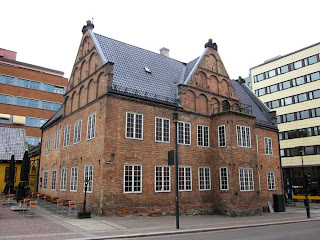 Another example of excellent preservation is Gustav Adolfs Square on the Stockholm waterfront. Everywhere you look you can see the grandeur of imperial Stockholm. Most of the buildings are from the 1700s. The one newer addition, the Riksdag building dating from 1905, was built in the neo-baroque style to fit in with the other buildings.

Sadly this isn’t common in Oslo. There’s usually little effort for new buildings to “fit in” with the surrounding older structures (just think of Oslo S and the west hall vs. the east hall, as well as the design for the new station)

They don’t really go together, do they?
Even on a more “historical” square, like Stortorvet, there’s still a disconnect in the styles, with a blocky, unattractive grey building from 1971 on the west side. The buildings on that site before were of a similar style as the ones remaining on the south side towards Karl Johan street. This new building completely disrupts the general architectural atmosphere of the square. Why they old buildings were torn down instead of reused, I don’t know.

Stockholm does a much better job of preserving its older buildings and regulating the newer, larger constructions to their own area. Now, this isn’t a rallying cry against development – no city is stagnant. Development, however, should be carried out in partnership with preservation. In Oslo development and preservation seem to be constantly clashing foes, especially in the mid-20th century. There are some notable recent exceptions, such as the converted factories and mills around the Aker river, and hopefully this trend will continue.

So, to sum up – Stockholm trip, good fun. Stockholm is definitely the bigger city, but Oslo’s small character has its own special charm which I actually prefer to Stockholm’s busy streets. Oslo, however, doesn’t preserve its historical spaces as well. Hopefully in this one regard the Oslo city planners will take a lesson from Stockholm, because Oslo has a lot of interesting history – more so than most people who live here give it credit for – and it’s worth saving.