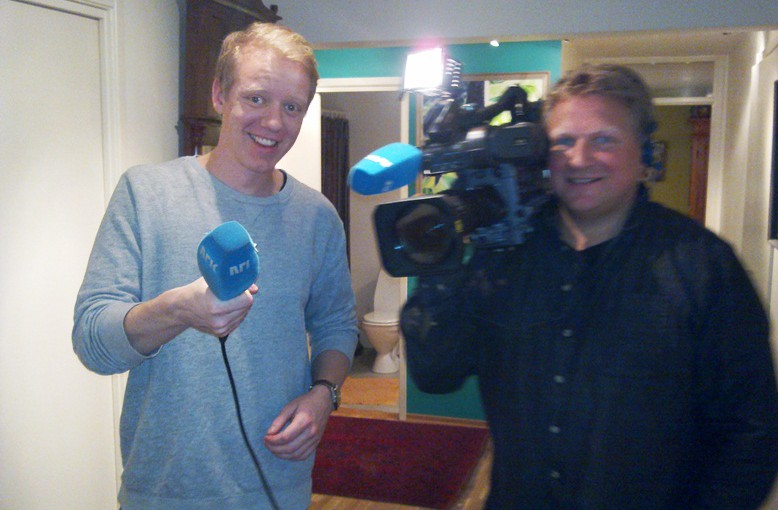 My wife and I were interviewed by NRK a couple days ago for a story on UDI regulations. I was told it should air tonight (Friday the 13th – oh, what a great coincidence) on one of the main NRK news broadcasts – but news of course is fluid, and since this is not really a time-sensitive story, it could always be pushed back.

We were being interviewed as part of larger story NRK was doing on current immigration regulations that UDI wants to change, but the government isn’t allowing it. These include, for example, the rules for difficult situations such as when a mother is illegally in Norway but has children with Norwegian citizenship. My case was no so dramatic – the previous earned income requirement for a family residence permit (oppholdstillatelse). Thankfully my case had a positive outcome – I received my residence permit, though not until after I had waited 14 months, UDI lost some my papers (and then accused me of never turning them in), and I had been served a deportation order.
If you read the papers or watch the news, you’ve heard about the problems immigrants face at UDI. The wait times are incredibly long, the process can be confusing, and seemingly clear-cut cases are delayed or rejected on technicalities (most recently, the case of a Norwegian mathematics professor received wide-spread attention). This frustrating system stands in contrast to, say, the American immigration system – at least in my experience. When my Norwegian wife applied for a residence permit (green card) for the U.S., the entire process was fairly straight-forward and only took four months. Through my travels I’ve dealt with immigration systems in the U.S., South Korea, Russia, China, Norway, and Kazakhstan, and without question the process in Norway was the most difficult and prolonged.

There are many reasons for this – and let me say upfront I’m not here to bash UDI or its employees. UDI has to enforce the laws and regulations it is given, whether it likes them or not. As this news story will apparently show (or so I’ve been told), UDI in fact doesn’t agree with some regulations, including the one that tripped me up. The employees at UDI (and UNE, for that matter) are generally good, hardworking people dealing with families who are going through incredibly stressful and difficult situations. It’s a tough job, and I’m sure the people at UDI don’t like rejecting family members any more than the applicants like being separated from their families, but the case-workers must follow the regulations, even if the regulations are producing unintended results.

Hence the discussion over the previous earned income requirement. If you like reading legal documents (and if you’re an immigrant dealing with this issue, you should be reading through the legal documents), this requirement comes from Section 10-9 of the Immigration Regulations. You can read the regulation in English here (page 52) and in Norwegian here (page 60).
I’ll admit that I’m not aware of all the reasons for this requirement. I had heard (and this was confirmed during a discussion with someone from NRK) that it was in part added to deal with arranged marriages. I fully understand the Norwegian government’s concern about this – there are immigrants in Norway from cultures where arranged marriages are still practiced, yet this practice is not in line with Norwegian cultural values or Norwegian attitudes on individual rights. However, this regulation has ended up creating serious problems for many people who are clearly not in arranged marriages, and are not coming from cultures that practice this (not that rules should be applied based on cultural background – that is really against any values of equality under the law).

There are several reasons why this law has unintended effects (and let me make clear that what follows is my understanding of the situation, gained from personal experience and discussions with UDI officials and others – I am not a lawyer, and you shouldn’t take this as legal advice, just in case I am mistaken on any point). One reason is the fact that under the regulation, the entire burden is placed on the Norwegian spouse. The foreign spouse can be making money hand-over-fist, but this doesn’t matter. You could, in fact, as a family be worth millions, but this also doesn’t necessarily matter. It’s all about the Norwegian. There are a few ways around this requirement – the spouse could be studying, or that spouse can show for the past two years they have a net worth of more than 1 million kroner (about US $160,000) – but again, this is only the Norwegian spouse, not the family as a whole, so if you as a couple have that much, but it hasn’t been in the Norwegian spouse’s name for the past two years, it doesn’t count. Other possible situations are not considered – what if the Norwegian spouse was injured and not working? What if they were pregnant, or on maternity leave? What if they were a stay-at-home mom or dad? What if they were volunteering? What if the Norwegian spouse, for whatever reason, didn’t have the legal right to work in the country they were in the year before? None of these issues are considered, and if the Norwegian was in one of those situations, their spouse’s application will be rejected.

Another issue is the amount itself – the requirement is that the year before you applied to UDI, the Norwegian spouse earned around 225,000 kroner (US $37,360). Now this is a perfectly understandable amount for a minimum income to live in Norway – this is an expensive country, after all, and also that amount is before taxes. The requirement, however, doesn’t seem to take into account that the rest of the world is not necessarily like Norway. This was our situation – my wife is a teacher, and was working as a teacher in the U.S. the year before we moved to Oslo. The U.S. educational system has a lot of problems, including intense budget cuts and the breaking of unions, which leads to decreased bargaining power and decreased wages. The simple fact is that at this point in time many teachers in the U.S., especially younger ones still in the early years of their career, don’t earn $37,000 a year. They’re working, they have a full-time job, sometimes even with benefits, but they’re not necessarily making enough to meet the Norwegian requirement. That doesn’t mean they’re poor in the U.S. – in fact, two people earning incomes below that amount can still live pretty nice lives in America. Again, though, the Norwegian regulations don’t care what you made as a family, just what the Norwegian earned – and in our case, it wasn’t enough. You could also encounter this situation if the Norwegian was, say, working at a school or NGO in an undeveloped country with low pay, or if the Norwegian spouse was only working part-time in order to be at home more with his/her children. The fact that the Norwegian was working and/or has a career and an experienced background isn’t enough, nor is that fact that a similar job in Norway would pay much better and meet the requirement – UDI only looks at the actual amount earned.

Now at this point some might say “But what about what the couple is earning now? Doesn’t that affect this?” The answer is no – current/future income is a completely separate requirement (Section 10-8), again dependent solely on the Norwegian spouse. So, as in my wife’s case, you can have a good job upon your return to Norway that pays well above the minimum requirements, but the application will still be rejected on financial grounds because of your situation the year before.

So, to review, the regulation only looks at the Norwegian spouse’s income and doesn’t look at the couple/family as one financial unit. It does not consider the many legitimate reasons why a Norwegian might not have been working the year before. It does not consider that in many countries decent, full-time jobs do not pay as much as what you would expect to earn in Norway. It also will not allow you to use overall savings as a family, and the Norwegian spouse’s savings/net worth can be considered only if the amount is more than four times higher than the income required. I think you can see how a lot of legitimate, financially sound families find themselves tripped-up by this regulation.

Then what do you think happens? What would you do if, after already waiting a year or more, you were told you’re being separated from your husband, wife, or samboer on a technicality? What would you do if you were told you could no longer be together with your children because of a bureaucratic accounting method? Why, you’d fight, of course. And so everyone in this situation does. They call UDI incessantly, they go to UDI’s offices, and they send dozens of e-mails and mountains of letters with additional documentation. They retain lawyers who bug UDI and UNE employees at all levels. They start applying for different visas in an effort to remain in the country. In short, they waste UDI’s time and contribute to the incredibly long waiting periods we currently find with the immigration process. You can’t expect UDI to quickly deal with new cases when they’re stuck re-reviewing ones from 15 months ago.

So what is to be done? Well, there I don’t have a good answer – as I said, I’m not a lawyer. Plus, I’m sure this regulation does preform some positive functions as well – hopefully including the fulfillment of one of its original goals, to deal with arranged marriages. However, there are clearly some unintended consequences. Honest, loving marriages and families are being torn apart because of it. Husbands are losing their wives, wives are losing their husbands, and children are losing their parents. It is cruel. And it is happening, not because these families are honestly in some sort of dire financial straits, but because the government has allowed UDI to only count a family’s money a certain way. It is wrong. And, considering that Norway is the home of the Noble Peace prize and a country that prides itself on human rights, it is downright shocking.

Something needs to be done – again, I cannot say exactly what, but the regulations need to be made somehow more flexible, while at the same time remaining strong enough to protect against the concerns of the Norwegian government which caused them to write the regulation in the first place. It’s a difficult balancing act, no question, and while I don’t know how to achieve perfect results, I do know that right now the balance is off, with incredibly painful results for many Norwegians and their families.

At any rate, that’s basically what I told NRK in the interview. We’ll see how much actually makes it onto the news – I’ll be happy if it’s more than 20 seconds. At the very least, I’m glad that some of issues regarding immigration and UDI are being discussed, since it effects so many of us who are “ny i Norge”.

Okay, I’ll get off my soapbox now.