I had a chance to visit two Christmas markets today in downtown Oslo. The first was the Farmer’s Market (Bondens marked) at Valkyrie plass in Majorstuen, where there was some delicious smoked salmon and smoked whale (seriously, try it when you get a chance, it has an excellent flavor). The second was the large Christmas market along Karl Johan gate at Spikersuppa, where we found a good-deal on delicious homemade sausages, including garlic sausage and reindeer sausage. 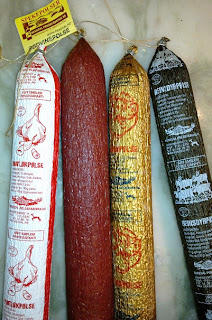 My haul from the market. It’s a literal sausage fest in here!
I noticed that a lot of expats left town this weekend to spend the holidays at home. If you’re sticking around for the next few weeks, though, then be sure to spend some time at the markets around town – they’re the best place to get traditional Norwegian holiday treats. Unfortunately this was the last day for the farmers’ market, but the market on Karl Johan is open until next Tuesday the 20th. For more info on holiday happenings around town for those of us spending the yuletide in Oslo, check out the Christmas section of VisitOslo’s website.

I was woken up a couple nights ago around 1:00am – by what I don’t know, the street outside was unusually quiet. I live in downtown Oslo, where you’re lulled to sleep every night by the sounds of cars, trams, street cleaners, and loud drunks. You’re used to noise, in fact you expect noise. It was strange, then, that it was Tuesday night, relatively early still (the bars were still open), and yet there was barely a sound to be heard outside. What could be keeping all the Norwegians in, I wondered?

I looked up the date, December 13th, and saw it was in fact St. Lucia day. Now if you’ve been around Scandinavia for even one Christmas (or if you’re from somewhere a lot of Scandinavians emigrated to) you probably know St. Lucia day – the one where kids have a candlelight procession and every year one lucky child tempts fate by placing a wreath with lit candles on their head and then walking through school or church praying their hair doesn’t catch on fire. It’s mainly a Swedish holiday, though people do celebrate it here as well.

The traditional St. Lucia celebration – fortunately today you have the option of using fake candles
But then I read about another aspect of St. Lucia day — a much darker day when Norwegians feared for their lives and hid from the ghosts and demons which took over the world.
In the old Julian calendar the longest night of the year was on December 13th. People in Scandinavia believed that a she-demon or witch called Lussi would ride through the air with her minions. Their prey was anyone foolish enough to be outside (hence the quiet streets when I woke up, I suppose), or anyone who had not finished their preparations for Jule (as if there weren’t enough reasons to beat the rush and finish your Christmas shopping early). Apparently Lussi could also act as a sort of anti-Santa Claus, coming down the chimney to take away bad children. The best defense against all this was to stay up all night indoors with the lights on. That then later fed in to the Christian holiday, St. Lucia’s day, to be associated with candles and light.
The Norwegian Visearkiven (song archive) had an interesting post about Lussinatt, including a song from western Norway people would sing (with my rough English translation):
It turns out that the time around Christmas was actually a very frightening time for most Norwegians in the old days. Spirits roamed free not just on Lussi night, but potentially all the way to Christmas itself. There was no knowing who you might encounter, the worst possibility being Lussi herself with her demon followers in tow on a night ride (a Norwegian version of the old European ghost story of The Wild Hunt). The Wild Hunt by Norwegian painter Peter Nicolai Arbo. You definitely want to stay out of the way of this craziness on one of our cold nights.

As opposed to the “old” Christmas stories I’m used to from growing up in the US (which in most cases came from Victorian England) which focused on love, giving, and the “Christmas spirit”, the old Yule legends in Norway are harsh and frighting, reflecting the cold and darkness this season brings. Reading about them causes me to appreciate the lights everyone places on the sidewalks and windows here – a modern day effort, in a way, to ward of the bad spirits and invite people inside for warmth and safety (and shopping).

A new book was actually just published in Norwegian about these old stories, Julens Myter. I’ll keep my eyes peeled the next time I’m in a bookstore, and hopefully can find a copy of it to creep myself out more. In the meantime, keep your eyes peeled for any ghosts on horseback flying around the Radisson or Post Tower – after all, ’tis the season.