One of the best overviews of Danish-era Christiania is Mitter Lund’s 1745 drawing of the city as seen from Ekeberg. While other, often Romanticist-influenced representations of the city over-exaggerate the terrain of the surrounding hills or the heights of the fortress and church towers, Lund’s drawing presents a view of Christiania which, to my mind, best captures the city as described by the records and travel accounts of the time.

The drawing’s full title is “Prospect af Aggershuus Festnings, Christiania Byes og Opsloe Forstads Østre Siide, optaget ved Eegeberg udi Opsloe og forfærdiget udi Aaret 1745 af Mitter Lund”, and can be translated as “View of Akershus Fortress’, Christiania City’s and Oslo suburb’s eastern side, as drawn from Ekeberg in Oslo and completed in the year 1745 by Mitter Lund.” The work was widely distributed in the 1891 edition of Det gamle Christiania: 1624-1814 by Ludvig Daae, and what few framed prints exist seem to have been removed from copies of this book.

A high-quality scan can be found here:

Various elements are labeled, numbers for sites in Christiania and letters for those in the old city of “Opsloe”. If you have difficultly reading the map itself, a transcribed list of sites can be found here.

Starting from the left, the striking white walls of the fortress seem to gleam in the sun, a stark contrast to the bare red and orange brick visible today. To the left the low buildings of the eastern fortress, many recently constructed, can be seen. Today this area is home to the Ministry of Defence and the docking point for ferries to Denmark.

Moving right we see the city of Christiania,  over 120 years old at the time of drawing. Several important buildings are labeled, including the City Hall (2), the Latin School (4) on Dronningens gate,  and the town church (9). 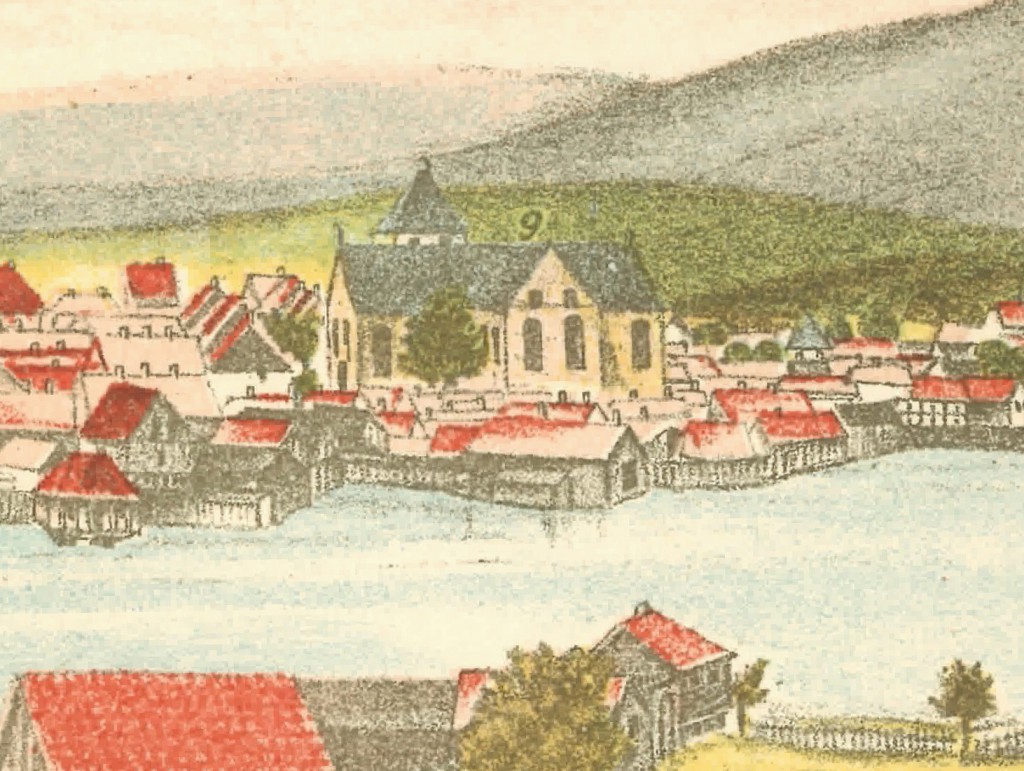 Oslo Cathedral, which at the time was known as Vår frelsers kirke (Our Savior’s Church), can be seen with its original low tower. The tall bell tower we see today, as well as the surrounding  shopping arcade, were added in the mid-1800s. Another sketch of the church’s design in the 1700s can be seen here.

One interesting note is the inclusion, off on Hammersborg hill, of Christ Church. This served as Christiana’s first house of worship before the Holy Trinity Church on the main square was completed in 1639. Tiny Christ Church, which gave its name to today’s Christ Graveyard (Christ kirkegård), was torn down only 11 years after Lund made this drawing, making this likely one of the last depictions of the building. Though the level of detail is low, it still gives us a sense of the church’s setting, outside the town, nestled quietly  among the trees on a lonely hill above the buildings and the bay.

Squint and you’ll notice the tiny detailed logs sitting on the harbor, awaiting transport, most likely to England. These were in fact stacked several meters high, often towering over the people working on the Bjørvika docks among the “city of timber”.

The Tukthus, or prison, is clearly visible (13) in the eastern stretches of the city, dominating the surrounding skyline. From this drawing it’s easy to understand why Karl Johan, upon first visiting the city following the dramatic events of 1814, mistook the prison for the place.

Old Aker Church (14) can be seen on its isolated hill in the distance. Lund’s work unfortunately fails to capture the details of the surrounding farms and pastureland, but still allows us to see  how remote the church remained from the city itself well into the 18th century.

Though the town of Christiania is well-established at this point, we can see that the old area of Oslo was by no means “abandoned”, despite this being the word often used to describing the transfer of the population from Oslo to Christiania. Several homes still remain, as well as Oslo Hospital (d), the stately Ladegård (f), the barely-visible ruins of St. Hallvard’s Cathedral (h), and the Bishop’s house (i).

Several copies of this printing can be found in collections around town, and some have been framed and put up for display, though up to now there was no good copy of the map online. Given the uniqueness of Lund’s work, in both time and perspective, it only seemed right to have to it available online for everyone to examine and enjoy.