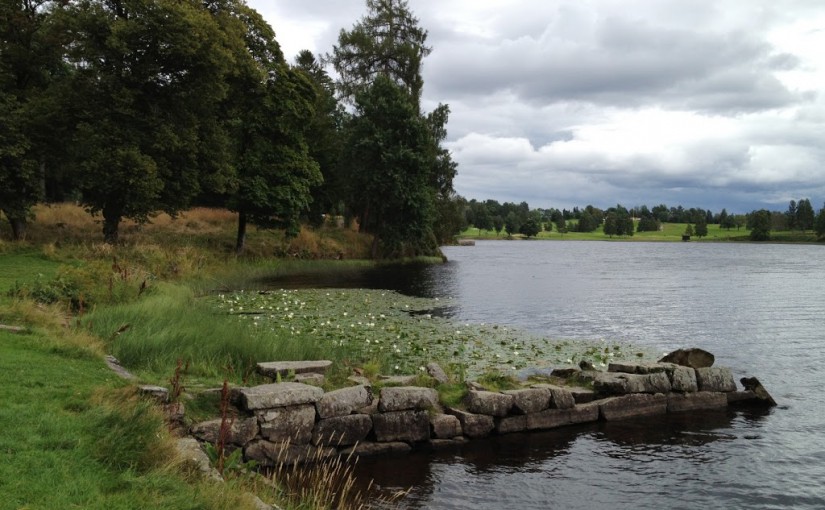 After a long summer of visiting friends and family abroad I’ve returned to Oslo just in time to enjoy some of the city’s remaining sunny summer days. This last Sunday I headed out to the northwest edge of Oslo, up to Bogstad Farm (in Norwegian, Bogstad gård).

Bogstad farm stretches across a large area on the north side of Bogstad lake (Bogstadvannet). The property boasts an impressive 18th-century country manor house, large barns and workshops, beautiful baroque and English-romantic gardens, and a pleasant shoreline where you can relax, fish, or feed the many ducks and geese.

You gonna feed me?
The Bogstad area was originally under church control in the Middle Ages before being confiscated by the crown during the Reformation. It was sold in the 1600s to Morten Lauritzen, who was mayor of Christiania (Oslo) at the time, and has remained in private hands from then until Oslo kommune acquired the property in 1955.
The manor house and gardens we see today are primarily the work of Peder Anker. He was member of the influential Anker family who were the premier business and political clan of their day. Peder Anker served as the first Prime Minister of Norway following the constitutional assembly in May 1814 (which was coincidentally held at the home of Peder’s cousin, Carsten Anker). Much of their money was made in the timber industry, which was booming at the time, and Peder Anker put a fair amount of his earnings into creating a beautiful, stately retreat just outside Christiania.
Bogstad is well-known for its gardens on the shore of the lake. The gardens were planned out it two phases. The earlier part is a classic baroque garden dating from the 17th century, while the other incorporates an English landscape style that was popular in the late 1700s and early 1800s. The gardens at Bogstad served as an inspiration for many parks throughout Norway. Extensive restoration over the past decade have returned the gardens to their original styles, and they remain a pleasant place to stroll and relax on a nice day. 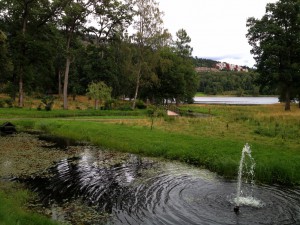 Part of the gardens at Bogstad
It was an open farm day when I was there, which meant there were a number of kid-friendly activities going on. Bogstad is kept up as a working farm, and the kids were having fun exploring the various flowers and vegetables growing in the garden, as well as trying to feed the farm animals in their pens.
Bogstad is a bit out of the way, lying as it does on the very western edge of Oslo, but it’s still easy enough to get to by car, bike, or public transportation (bus 41 from Røa subway station). There are events happening all year, so check out the Bogstad website for more information.