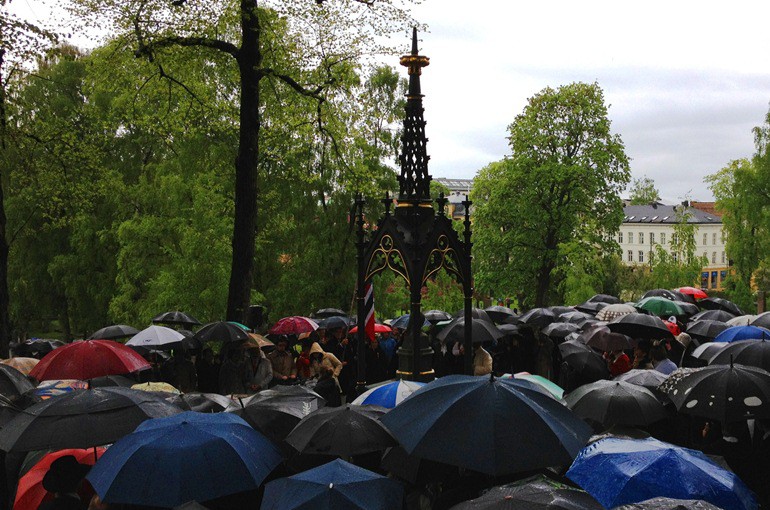 May 17th is Norway’s Constitution day, a day for bunads and flags and kids parading up and down Karl Johan street while the Royal Family tries to not strain their wrists during four straight hours of hand-waving.

There are some smaller celebrations, though, that are easily overlooked. NRK doesn’t film these acts of remembrance – only those few who gather together in the early morning hours (and in the case of this year, brave the morning downpours) can see and be part of these ceremonies.

May 17th isn’t simply a day of parades and fancy clothes, but is also a time to recall what made Norway the place it is today. There are a number of Norwegians who have had a profound impact on the country, and through their acts the country was reshaped, sometimes radically and sometimes violently, into the form we are all familiar with. Most of these names are now confined to history books and wouldn’t be recognized by most Norwegians, but fortunately there are a few who still take the time once a year to give these great men of Norway’s past the recognition they deserve.

This May 17th I was able to attend two such ceremonies, one for the man who helped to create a modern Norwegian identity, and another who defended Norway’s constitution on the battlefield, and in the process set the groundwork for Norway’s ultimate independence. 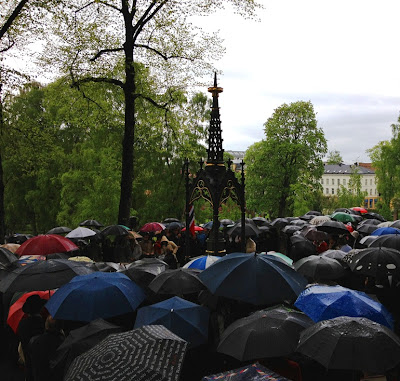 The first ceremony, which was fairly well attended, was at the grave of poet Henrik Wergeland. This is quite fitting as Wergeland was a major proponent for holding celebrations on May 17th. There had been annual commemorations of the date that the constitution was ratified on since 1814, but they were rather small affairs. Nevertheless, the celebrations caused concern for the Swedish-Norwegian king at the time, Karl Johan, who in 1828 prohibited any patriotic songs or speeches on May 17th.

When the next Constitution day came around in 1829, a number of Norwegians in Oslo (Christiania at the time), led in part by Wergeland, celebrated anyway. Swedish troops attacked and began to beat the Norwegians while they were gathered on Stortorvet, just in front of the cathedral. Though the patriotic demonstration was broken up, Wergeland used the event and its aftermath to further push for May 17th to be a day of commemoration of the constitution. Karl Johan relented and revoked his prohibition, after which the size and scope of May 17th celebrations continued grow across Norway. 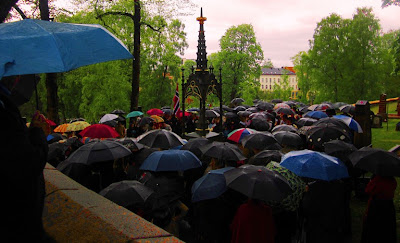 The crowd listens as a speech about Wergeland is given

The remembrance ceremony at the graveyard is lead by Oslo’s Jewish community, as a way of giving thanks to Wergeland’s efforts on behalf of Jews in Norway. As I mentioned in a previous post, the first Norwegian constitution prohibited Jews from living in the country. It was only after several decades of effort, in a large part spearheaded by Wergeland, that the constitution was amended and a Jewish community could grow in Norway.

A even lesser-attended ceremony is in a small graveyard behind Deichman Library. Known as Christ Graveyard, it was established following a massive outbreak of plague in Christiania in 1654. Several notable people were buried here over the next two centuries, such as Edvard Munch’s parents and his sister, who died as a teenager (she was the model for several of his paintings, such as “The Sick Child“).

On May 17th, all attention in this graveyard is focused on a impressive grave near the back gate. A tall granite obelisk, it has a handsome profile of a man without whom Norway as we know it today might not exist. That man is Andreas Samuel Krebs – “The Hero from Matrand”. A close-up of Krebs’ grave monument

The general story of Norway in 1814 is sadly not presented in any good English-language book. With the 200th anniversary of the events 1814 just two years away, I hope this unfortunate situation will be remedied soon. For the time being, if you are not familiar with the rather epic story of the creation of Norway’s constitution and its brief struggle for independence, you can read a quick summary here.

The initial push for independence that year culminated in the constitution being signed on May 17th, 1814. This document called for radical changes to the way governance was carried out in Norway, most importantly through the creation of the parliament, the Storting.

Norway, however, had little outside support in their push for independence, and the Swedes, who had been promised Norway by the European powers, were eager to collect their prize. In the summer of 1814 Swedish troops crossed into Norway, lead by Karl Johan. The understanding was that Norway was not destined to be a true co-equal in a union with Sweden, but would rather find themselves as the much lesser member, functioning more as a Swedish province, in much the same way as Norway had been a de-facto Danish province since the Reformation. This new constitution and Storting were not to be tolerated, and the Swedish forces were there to crush any aspirations of independence once and for all. For the Norwegians, it was not enough that they had created their own constitution – now they had to defend it.

This task fell in part to Krebs, a major in the Norwegian-Danish army who threw his lot in with the Norwegians in 1814. In two battles on August 2 and 5 he first stopped and then routed the Swedish forces advancing on Kongsvinger. These victories were the moral boost Norway needed, and the successful tactical retreat by the Norwegian army a few days later at Langnes further drove home the fact that the Norwegians were ready to defend the accomplishments of Eidsvoll. If the Swedes wanted to destroy the Eidsvoll constitution, they would have to fight their way across all of eastern Norway, a slow and costly proposition. Instead, Karl Johan decided to negotiate with the Norwegians. The peace treaty, known as the Convention of Moss, was a victory for the Norwegians (despite what modern Norwegian historians might say) in that it allowed them to keep their constitution and parliament. These would serve to greatly strengthen Norway’s position in the union with Sweden, and it lay the groundwork for the May 17th celebrations and subsequent growth of nationalism and identity in Norway over the next century.

Had the Norwegians lost at Lier and Matrand then the entire history of the Norwegian-Swedish union would have been much different, to Norway’s detriment. For this reason, and for his bravery as a solider, Andreas Krebs is remembered to this day in a Royal Guard ceremony every May 17th.

The Royal Guard in formation near Krebs’ grave in Christ Graveyard on May 17th
This ceremony this year was decently attended, given the relatively unknown status of Major Krebs (a status that is completely undeserved, considering his contributions to his country). I would estimate there were around 50 people or so in attendance, not counting the Royal Guard members. There were even several descendants of Krebs there, continuing to honor the memory of their ancestor. 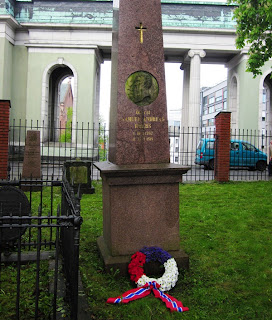 A wreath is laid on Krebs’ grave every May 17th 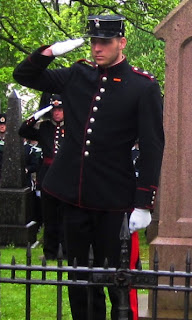 After giving a speech highlighting Krebs’ bravery and service and laying a wreath, a member of the Royal Guard salutes towards the grave 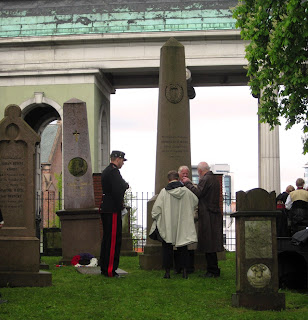 Descendants of Andreas Krebs talking with a member of the Royal Guard after the ceremony
There are several other wreath-laying ceremonies around Oslo on May 17th, including one at the statue of King Haakon VII, the graves of Norwegian excited by Nazi forces during World War II, and the grave of Christian Magnus Falsen, who was instrumental in writing the constitution at Eidsvoll. The memorials by the graves of Krebs and Falsen are the only two events on May 17th which  commemorate someone directly involved in the events of 1814.

If you are interested in seeing more of May 17th in Oslo besides what happens on Karl Johan street, check the official May 17th schedule before next year’s events to see what is planned. It will be a worthwhile experience.