…everywhere we see an Aker. The name “Aker” is scattered around Oslo, from the Old Aker Church to Aker Solutions. It’s the name of the river demarcating the town’s (in)famous east-west divide, and Oslo City Hall is flanked by two Akers – Aker Brygge and Akershus Fortress. Beyond that, nearly all of Oslo is surrounded by Akershus county. Aker truly is everywhere.

A selection of some “Akers” in Oslo – clockwise from the upper left: Old Aker Church, Akershus Fortress, the Aker River, Oslo-based Aker Solutions, and Aker Brygge

The cold has kept me inside a bit more than usual, which means there is time for some research on the story behind Aker. For most historical inquiries about Oslo there are some standard sources to check first – Oslo Byleksikon, the Store Norske Leksikon, and articles from the Norwegian Wikipedia and the LokalHistorieWiki. The wikis can be a hit or miss, but in some cases there are amazingly detailed articles by people who clearly know their stuff. I also grabbed a few books from the Oslo University library (if you’re new in Oslo, go get a library card at the university library right away – it’s free, you can check out unlimited books, and they have a lot of new non-fiction publications in English, usually long before they would be available at Deichman).

As far as Oslo place names go, the general rule is to assume the name has something to do with a farm. “Løkke”, for example, which we see in names like Grünerløkka and Tullinløkke, means a paddock, where farm animals were kept. Nearly the entire Oslo valley was already filled with farms by the time of Viking era (c.800 CE), and these farm names (with endings like –løkke, –sted, or –gård) became neighborhood names as the city expanded out.

One of earliest of these farmsteads was actually called Aker Farm (Aker gård in Norwegian). The farm was probably around from the Iron Age, which in Scandinavia was from c.500 CE to c.800 CE. The name was about as unimaginative as could be – “akr“ was just a Norse word for field, so basically this was “field farm”. What Aker Farm lacked in creativity, though, it made up for in size – the large property originally stretched from the Aker river on its east side to today’s Bislett neighborhood on its west.  It was later divided into Lille (small) Aker and Store (big) Aker, with Bislet creek marking the border between the two. Bislet creek, after being hidden underground for years, is partly visible again running through the middle of Oslo Høgskolen on Pilestredet. 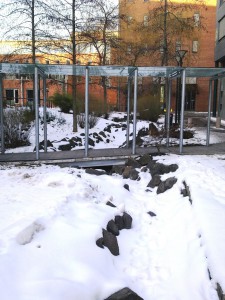 Bislet Creek (Bisletbekken), frozen over at the moment, runs through the campus of Oslo Høgskolen before being routed through pipes, eventually emptying out into Pipervika. This served as the border between the two Aker farms.
Researchers aren’t exactly sure where the main centers of these two farms were located, but it’s believed that Store Aker was around where Old Aker Church is today and Lille Aker was somewhere just to the north of today’s Hegdehaugveien, likely on Underhaugsveien. In the Middle Ages the farm belonged to Nonneseter Abbey, but was later transferred to Akershus Fortress and supplied the fortress with foodstuffs. 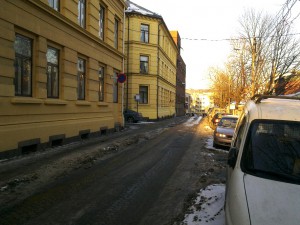 Looking down Underhaugsveien towards Bislett Stadium. Lille Aker farm was likely centered around here,
Speaking of which, how did the name of the farm end up in the name of the fortress? Well, south of Aker farm was an area known as Akershagen, meaning “Aker garden”, or “Aker yard”. This yard covered roughly the area from the Parliament building down to Akershus Fortress, and from Rosenkrantz gate over to Dronningens gate. At that time the shoreline of Oslo was much higher than it is today (the shore line has changed to its present location thanks to both post-glacial rebound and man-made expansions starting from the 1700s), and the small peninsula where Akershus Fortress is located today was much more narrow. Nearly the whole of entire peninsula was likely part of Aker yard. The yard itself was likely used as a grazing area for Aker farm up until the early Middle Ages, when it was acquired by the king.

Even more Aker! This street, called first Akersgata and later Akersveien, runs from Akershus fortress up to Old Aker Church.
From this point onward the headland became an important site in Norwegian history, especially Norwegian royal history. The defensive capabilities of the headland, which was known as Aker headland (Akersneset in Norwegian – I’m not sure which was named “Aker” first, the garden or the headland) were recognized early on, and there was likely some kind of simple fortification on the headland during the Viking era. The area was used by several kings and nobles during the early Middle Ages, and was even the site of a battle involving King Sverre in the year 1200. The inital fortress as we know it today began to be built on Aker headland in 1299 under the reign of Håkon V, and was called the building (hus) on Aker, or Akershus. It would serve as both a palace and a fortress. Today, inn addition to being a popular tourist attraction, it continues to serve as the home of the Norwegian Defense Ministry.

Akerhus Fortress, whose name ultimately derived from a farm. Seriously, almost all names in Oslo are somehow farm-based.
What of some of the other Aker names? Well, around the year 1100 a small stone church was built on a hilltop in Store Aker farm. The church was named after the farm and became known as Aker Church, though today we refer to it as Old Aker Church (Gamle Aker Kirke). At that time Store Aker farm lay in Oslo herred – the word herred here meaning roughly “hundred”, and served as an old system of organization in Scandinavia (you can read more about the herred system here). When the city of Oslo was established in the early Middle Ages, the large part of the herred that was not incorporated into Oslo proper was renamed Akers herred, after the church and its surrounding parish. Over the next 900 years Aker herred was gobbled up by the expansion of Oslo, bit by bit, until a sweeping reorganization in 1948 transferred the rest of the herred to Oslo proper.
The Aker river was originally called the Frysja during the Viking and medieval periods. According to Gunnar Jerman in his book Akerselva – fra sagatid til opera (and retold here in Norwegian), this original name was done away with by a Danish bureaucrat. Writing in 1636 while stationed at Akershus fortress, the bureaucrat was unsure what the name of the river near the fortress was, and so simply called it Aggershuuses elv, or (as well would spell it today) the “Akershus River”. The name stuck, and over time this was shortened to simply Akerselva – the Aker river. 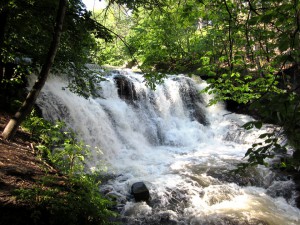 I wonder if at some point in the future there will be a movement to change the name back to Frysja, like there was to change Christiania back to Oslo.
The Aker river also was the namesake for Aker Brygge, in a roundabout way. An industrial company was set up in 1841 on the banks of the river near Øvre Foss, which at that time was still in Aker herred. The company incorporated the herred name into its name, calling itself Akers mekaniske verksted. This company, which got involved in shipbuilding, eventually moved to the city shoreline, directly across from Akershus fortress. The brygge, or wharf they built and worked at was named after the company – Aker Brygge. Though the company mostly left the area in the late 20th century, the name remained, and Aker Brygge became the snazzy dining and shopping locale we know today. 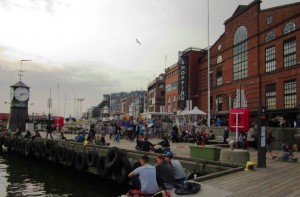 Aker Brygge, transformed from industrial work area to public relaxation space.
Finally, the Akers mekaniske verksted had another transformation to go through. In the mid 20th century Akers mekaniske verksted brought a number of other companies and became known as the Aker Group. It continued to grow and merge, buying shares in other companies, including Kværner ASA. These groups eventually evolved into Aker Kværner, before being renamed Aker Solutions in 2008. So, next time you stroll along Aker Brygge or the Aker river, view the harbor from Akershus fortress, or go to your job with Aker Solutions, remember – the names around you have a history and legacy nearly as old as Norway itself.